Inside:Ready to off the elf? Try our Elf on the Shelf Break-Up Letter

I can remember the first time I saw that cute and sassy little fellow all dressed in red with his rosy cheeks and sly little grin staring down at me over dinner.  I was immediately taken in by all his holiday charms.

I pointed up at him as he sat there above us on his little perch and asked our friends about their impish mystery guest.  They explained that The Elf on the Shelf had been sent by Santa to “watch over” their darling daughter before Christmas and to report back to The North Pole about whether she was being mostly naughty or mostly nice. 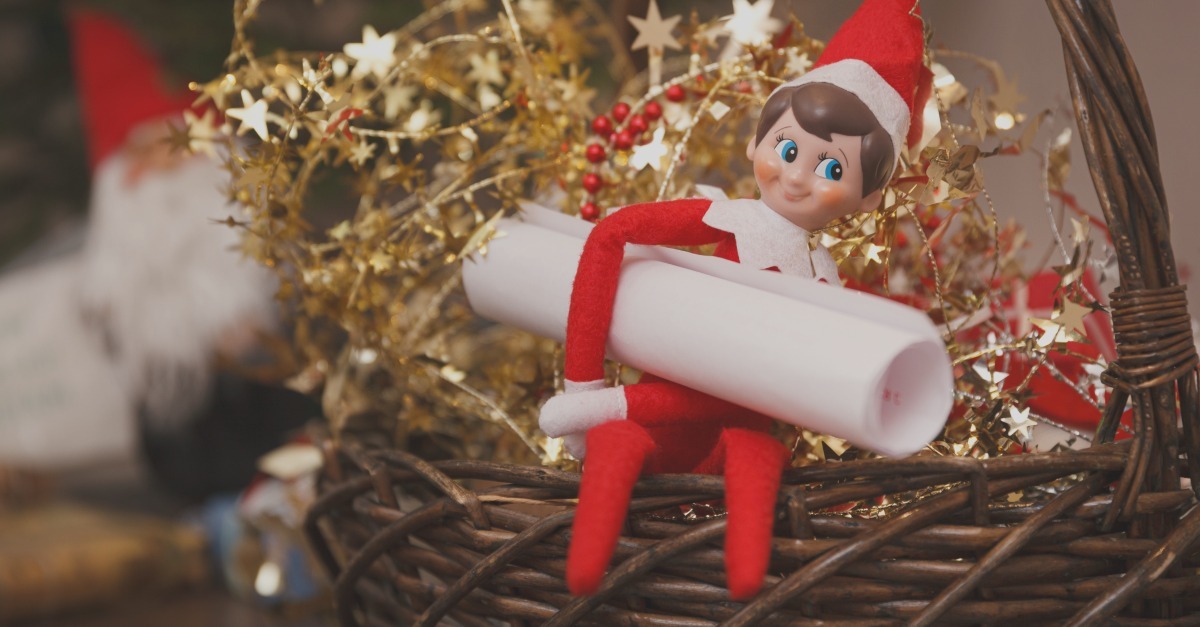 At the time, my first son was about 18 months old and I admit I thought the idea was a stroke of genius. I was definitely up for enlisting a partner in crime to help me in my attempts to tame my unruly toddler.

Once we got home, I flew to the computer like the down of a thistle and ordered up our very own elf.  He arrived in the cutest box you could imagine with bright red NORTH POLE stickers and stamps. It was almost as if Santa himself had packaged up his minute minion personally and sent him on his way to spy on my sweet, unsuspecting boy.

Our initial relationship with this special yearly visitor went fairly well. My husband and I would giggle each night as we tried to come up with creative places to put him, and we beamed with pride as our son would race out each morning to discover what new hiding place his elf had found during the night.

Oh and I won’t deny, that watchful fellow with his ever present stare definitely came in handy from time to time, when it came to keeping our boisterous boy in line. One reminder of “he’s watching you”  or “you wouldn’t want Santa to find out” and you could see the wheels of mischief turning in his head suddenly grind to a halt.

But as I’m telling you this tale about our beginnings with Mr. Elf on a Shelf,  I think there are two VERY important things to remember here:

1.  We were NEW parents with ONE kid.

While it was fun at first, over time I began to feel a little bit guilty about this particular festive fib. I wondered if maybe we were crossing the line of appropriate parental manipulation. Plus, as the years passed, that elf changed from being cute to really kind of creepy.  I would swear on occasion those beady black eyes were following me around the house and I couldn’t help but think that his frozen plastic grin was hiding  something just a tiny bit sinister…but maybe that’s just me.

We also acquired our Elf on the Shelf, before it was actually a “thing”. It wasn’t over commercialized with displays of them in every major retailer from Halloween until Christmas, the holiday TV special wasn’t even in pre-production and there certainly weren’t thousands of posts on Pinterest to make you feel like if you just moved the little guy from one shelf to another that you were a total elf slacker (ummm, Pinterest didn’t even exist).

So, when child number two came along several years later, The Elf on the Shelf was already wearing out his welcome in our household.  There were many a nights my husband or I would wake in a panic wondering if the other one of us had remembered to move the elf. Then of course there was the challenge of coming up with more and more excuses why he seemed to have become so lazy.

“There was a terrible snowstorm at The North Pole yesterday
and it was safer for him to just stay put.”

“He seems to really have become attached to sitting above the fridge,
maybe it’s so he can sneak snacks during the night.”

At this point, it no longer felt like we were just stretching the truth, but pretty much telling bold faced lies to our kids. Plus, we’ve got pretty smart kids and they were getting a teeny tiny bit suspicious.

It was then that we knew it was time………….The Elf on the Shelf had to go.

But how we wondered, could we rid ourselves of this ever-present pest without ruining Christmas and scarring them for life? Then the answer came to us, like Santa was actually reading our wish list for the holidays this year.

We would stage an Elf on the Shelf break-up. It was PERFECT!!!

There was a way to get out of this tinsel tangled web we had woven without emotionally damaging our children for life, in fact they would come out with something even better than an elf. It was Win/Win for everyone.

Now for those of you who still enjoy the Elf on the Shelf tradition, please don’t judge us too harshly. We are a firm believer in continuing traditions as our kids grow into teenagers and beyond.

We’re not bad parents, just slightly jaded. For those of you who feel our pain and would also like to give your jolly yearly visitor a kick to the curb, here is how it is done.

Just print out the following letter on Thanksgiving night or shortly thereafter and leave a copy on the breakfast table for your children to find.

Elf on the Shelf Break-Up Letter 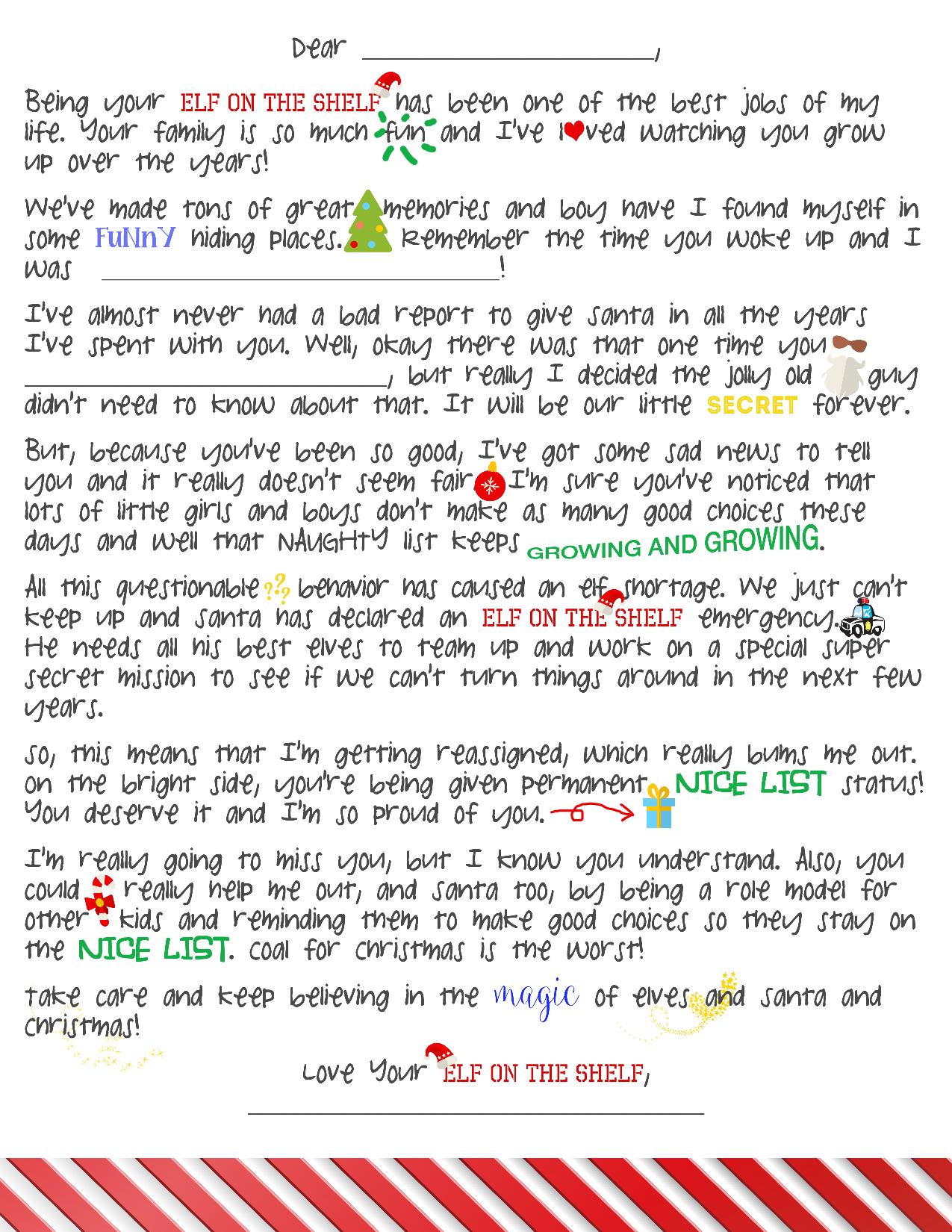 Leaving a few candy canes along with the letter couldn’t hurt and will serve as a convenient distraction as well as something to put into their mouths so they can’t ask a bunch of questions.

Also, play up that permanent NICE list status. In a day or two, your kids will be like “Elf on the Shelf who?” and you can kick back and appreciate your amazing parenting prowess and the fact that you’ll be sleeping great between Thanksgiving and Christmas this year with now Elf induced panic attacks pulling you out of a perfectly good slumber.

Merry Christmas to all and to all a good night!
And good riddance to The Elf on the Shelf!

Now that you’ve gotten rid of one thing for Christmas, here’s a great way to make sure you don’t end up with a bunch of other stuff you don’t want. Read here about  Gifting Experiences Instead of Things.

Also, be sure to check out these other super popular holiday posts that other parents have LOVED!

Family Christmas Games ; How To Have A Holiday Game Night

Do you have a funny story about your Elf on the Shelf?
We’d love to hear about them in the comments

Disclaimer: No Elf on the Shelf or children were hurt in the making of this post. This is all in good holiday fun and it would definitely not show Christmas spirit to leave us mean comments. It’s okay to love or hate your Elf on the Shelf and we respect whatever stance you take now or in the future.