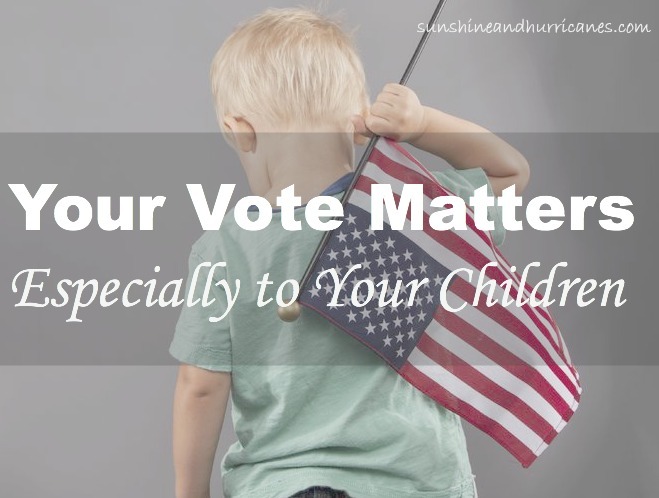 Your Vote Matters – Especially to Your Children

If you think in today’s frustrating and often disappointing political environment that your vote can’t make a difference, I’m here to tell you that if you have kids, you’re wrong. As parents, the act of voting represents something much more than the names and issues on any particular ballot.

In 2008, I took my then 4-year old son with me to the polls. At the time, he was often referred to as a “spirited” child, and I was eight months pregnant. For several days leading up to the election, I had visions of us entering the polling place (a church no less) and my child immediately wrestling free of my vice grip and running from voter booth to voter booth popping his little blond head up like a gopher, loudly inquiring, “Who are you voting for?” As I give chase after him in these visions, I knock over voting booths and elderly voters with my enormous belly and then go into premature labor.

Despite these overwhelming reasons to leave him at home and to stay there myself with my swollen ankles propped up on a pillow, I was going to vote and my son was going with me. Yes, our political system has problems, but I still wanted my son to understand from an early age that voting is a privilege.

His father and I taught him about the candidates, showed him pictures and told him about the people we would vote for and why. (We happen to belong to different political parties). We kept our explanations simple and positive. Overall, no matter who was elected, we wanted our child to view the President of the United States as a figure who represented the best qualities of our country.

When Election Day arrived, my son could barely contain his enthusiasm. When we got to the polling location, his behavior was better than I had ever seen before — or since. Once I finished voting, the volunteers gave both of us “I Voted” stickers. As we walked to the parking lot, he was already asking if he could show the sticker to his friends at school the next day. The whole experience was not what I would have expected from any 4-year-old, let alone mine, but as he excitedly talked with me on the way home about who I thought would win, I knew that even I had underestimated the impact of my vote.

As more elections days have come and gone, my now 10-year-old son has started tuning into the whole process on his own. In the years since our first voting escapade occurred, he has learned about September 11th and about the wars our soldiers have been fighting. He knows that in many other countries, children’s lives are more difficult and scary, because they don’t have the freedoms we enjoy here. This new knowledge means he asks far more complex questions that my husband and I struggle to answer, but it has also reinforced to our son that voting is not something to take for granted.

I took both my children with me to vote in 2012 for the last presidential election and we waited in line for over two hours. Yes, it was  a pain in my you-know-what to plan it around school and work schedules and to stand in line and wait with two young children. However, such inconveniences seem trivial when I consider the sacrifices of our military and their families to protect our right to vote, or when I read about parents in other countries who fight and die in hopes that someday their children will have the same rights as mine. When other parents are setting those kinds of examples, the least I can do is take my children with me to vote and then to celebrate with them at Thanksgiving how fortunate we are to live in this country, even with all its imperfections.

I Voted Today – Did You? If not, you still have time. If you’re not sure where to go you can easily find our right HERE.

« How to Save on Holiday Gifts
Cheesy Potato Soup »