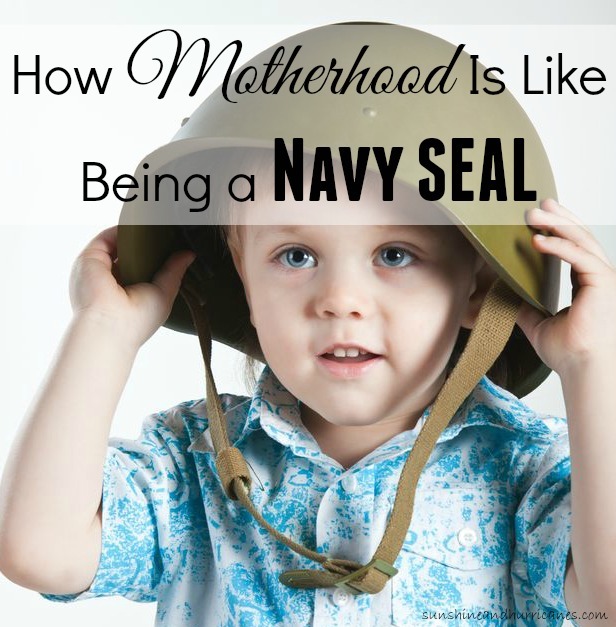 Did you know that as of right now women can’t be Navy SEALs? I’ve heard and read about all the grueling training that Navy SEALs have to endure, but I’m here to say for mothers everywhere: “Navy SEALs, BRING- IT-ON!”. This isn’t some kind of feminist tirade or rant against the military, don’t take me so seriously. I just think perhaps those in charge of Navy SEAL recruitment haven’t considered how badass we women can be.  I mean, c’mon, motherhood is like constantly being under siege. Let’s do a quick comparison shall we:

Navy Seals: If a trainee can’t hack it, then they can make a make a DOR (Drop on Request)
Motherhood: Yeah, as if

Navy Seals: Basic Conditioning
Motherhood: Carrying around 70lbs of extra weight for 9 months, carrying around a car seat with the baby in it for a year, carrying around the actual 30-50lb kid for another year and then chasing the kid for the another 2 years after that

Navy Seals: Massive Assaults on the Senses
Motherhood: The Wiggles and Caillou

Navy Seals: Hell week – five days and five nights with no more than 4 hours sleep
Motherhood: Prolonged sleep deprivation that lasts somewhere between months and until the child goes to college

Navy Seals: Listening closely to orders
Motherhood: Hearing your child’s particular cry in a crowd of 40 kids at Pump it Up, Chuck E. Cheese, etc and responding in under 5 seconds.

Navy Seals: Structure Penetration
Motherhood: Jimmying your way back into the car or house when you’re toddler locks you out

Navy Seals: Recovery (snatch-and-grab) Techniques
Motherhood: Expertly distracting your child with your cell phone in order to return toy to screaming child from whom your child just snatched toy without mother of other child noticing

Navy Seals: Provide Medical Treatment
Motherhood: Countless trips to ER before child is five; Complete control to smile and appear calm even when blood is spraying forth from an unknown location on child; and always having on hand exact character band aid needed for particular boo boo, which will only fully heal when applied with a magic mommy kiss

In all fairness, Navy SEALs and every other member of our military have a tough job and I am so grateful for each and every one of them. I would not trade being a Mom any day to do what they do, but I’m just sayin’… I’m not so sure they would trade with me either.